December 4, 10:30am
This masterclass is presented in association with Duke Performances. Music masterclasses are free and open to the public.

The members of the quartet are violinists Adrian Steele and Phoenix Avalon, violist Devin Moore, and cellist Joshua McClendon. The four began as an ensemble at the Juilliard School, and following a break during the global pandemic reconvened at the Kneisel Hall Chamber Music Festival in the summer of 2021 under the tutelage of Joel Krosnick. In addition to Mr. Krosnick, the ISQ has coached with Joseph Lin, Astrid Schween, Laurie Smukler, Joseph Kalichstein, Roger Tapping, Timothy Eddy, Donald Weilerstein, Atar Arad, Bob McDonald, Christoph Richter, Miriam Fried, and Paul Biss, while performing in venues such as Alice Tully Hall, the Kennedy Center, and the Ravinia Festival.

Their Banff triumph brings extensive tours of North America and Europe, a two-year appointment as the Peak Fellowship Ensemble-in-Residence at Southern Methodist University in Dallas, performances at Haydn Hall in Eisenstadt and the Lucerne Festival, plus a two-week residency at Banff Centre including a professionally produced recording, along with extensive ongoing coaching, career guidance, and mentorship.

END_OF_DOCUMENT_TOKEN_TO_BE_REPLACED 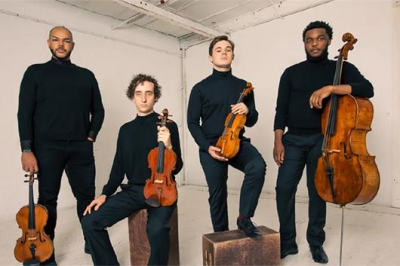