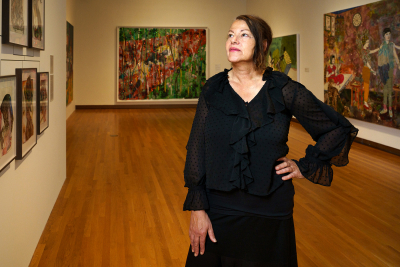 Dore Bowen has inherited a love of science & technology from her father, but in her own interdisciplinary way. (John West/Trinity Communications)

Dore Bowen comes from a family firmly rooted in science. Her father was a radiologist, and Bowen remembers how excited and intrigued he’d become with each technological breakthrough.

Bowen has inherited that love of science and technology, but in her own interdisciplinary way.

A research professor with the Department of Art, Art History and Visual Studies (AAHVS), Bowen began her art studies analyzing photography and conceptual art during the experimental Fluxus movement.

Coined by its “founder” George Maciunas, Fluxus is a state of creative flow where the work being created is “in flux” and can encapsulate many forms, from music and poetry to performance and conceptual art.

Bowen analyzed the way Fluxus artists grappled with photography. Rather than focusing on a final product, or the subject matter in the photograph, the artists were drawn to what the viewer couldn’t see: lighting exposures, photographic processes, chemistry — the act of perception itself.

After completing her Ph.D. in visual and cultural studies, Bowen curated exhibitions worldwide, while continuing to return to and pull from art history.

“Corridor Installation with Mirror” has two corridors meeting at a “v” where a mirror is placed, and the personal experiences within the actual piece can be quite odd.

Bowen published “Bruce Nauman: Spatial Encounters” (co-authored with Constance Lewallen) in 2019, a book born from the reinstallation of Nauman’s San Jose work. In the book, Bowen considers his installation as it was experienced in 1970 versus its reinstallation 48 years later.

Noting that the work is made of the same materials used in the 1970s to build San Jose into the suburban city it is today, common two-by-four sections of lumber, Bowen found that the installation resonated with this moment of architectural growth, while reflecting the political events of the time.

“When the work originally came to campus, students were protesting the Vietnam War, and President Nixon had just announced the campaign in Cambodia,” says Bowen.

“Students were angry, despairing. The installation created an experience of moving forward while ghosts appeared in these ‘corridor reflections.’”

And it is Bowen’s research on Nauman that has transitioned the focus to her current project: dioramas.

Thanks to Nauman’s architectural installations, where the viewer is forced to compare what is seen and heard to what is felt, Bowen has surmised that the diorama is an overlooked precursor to immersive installations.

Her forthcoming book, “The Diorama Effect,” presents the history of the artform from 1822 through the present.

Invented by Louis Daguerre and Charles-Marie Bouton, the first diorama was exhibited in Paris in July 1822. The aptly named “Diorama” exhibit was more of an immersive theater experience and less of what we associate with childhood school trips to a natural history museum.

Patrons sat on a rotating stage that slowly turned them from one multi-layered landscape painting to the next. The artwork depicted natural scenes and religious architecture. When the paintings were combined with Daguerre’s lighting and visual effects, the audiences were transported (virtually) back in time.

“Dioramas are forward looking — being one of the first mass mediums, using modern machinery and practices — yet they are deeply nostalgic,” Bowen says.

“They look back to childhood, or to ‘earlier days’ while being a conservative form, which supports traditional ways of doing things, and sometimes, deeply troubling ideologies as well.”

With this current research, Bowen is working to bring a vein of art practice to light. The defining feature with the diorama is the experience of time produced.

“I think now there is an opportunity for writing art historical accounts of such practices,” she says, “because the experience economy has taught us, for better or worse, that experience can be crafted and commodified.”

Along with her current research, Bowen will bring a range of new courses to AAHVS that will strengthen its Visual + Media Studies major — and address modern and contemporary art, modern spectacles and theories of experience, such as her spring 2023 course: “Queer Phenomenology and Art.”