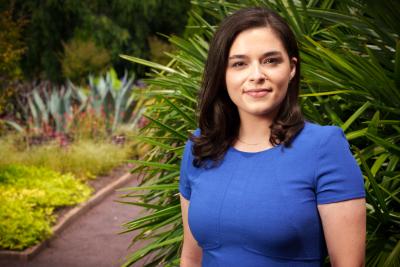 Lyla Halsted wants to peel away the preconceived notions and ideas so many people have, and reveal all the many things Islamic art and architecture can be. (John West/Trinity Communications)

“My freshman year at Davidson College I was mistakenly placed in an Islamic art class,” Lyla Halsted confesses.

She wanted to be a classics major, but Halsted, whose mother is Iranian, found a familiarity with the language and culture covered in her accidental class. She stayed with it and eventually earned her B.A. in art history.

Following an M.A. from the University of North Carolina at Chapel Hill and a Ph.D. from the Institute of Fine Arts, New York University, the North Carolinian has returned home to teach at Duke — and to further her scholarship.

“The Research Triangle really is a fantastic place to be as an academic,” she says.

Halsted specializes in medieval Islamic art and architecture (900-1300 CE), with a focus on the region’s material culture: physical artifacts produced and used by the people of the era.

The assistant research professor in the Department of Art, Art History and Visual Studies (AAHVS) is specifically drawn to amulets and talismans that provide protection from the phenomenon of the “evil eye,” the belief that certain people can inflict harm — and even death — with a mere gaze.

Halsted explains that the evil eye, in one form or another, can be traced throughout history, from Sumer and Ancient Egypt to fourteenth-century Syria and even in our modern world — where it’s right at our finger tips. And we know thanks to ancient texts and artifacts that provide evidence of its longevity.

“Whenever the protective talismans and amulets are located, they become the evidence that the practice of seeking protection from the evil eye existed in that area, by those people and during that time period,” she explains.

“There’s even an ocular emoji, resembling a popular type of Turkish blue eye amulet, on the iPhone.” she explains, “It was added, in part, for those who wish to express their desire to keep the evil eye away in their texts.”

While the name for the harmful power of the gaze has varied based on region and language, the ideas comprising its strength, as well as the use of amulets and talismans, are a constant.

“These objects encompass a range of materials — engraved metals and gemstones, paper amulet scrolls, medieval medicinal bowls and even mosaic floors — and were meant to protect, and even cure, the effects from these malignant gazes,” Halsted explains.

This field of research is relatively new, developing in the last 15 years, and Halsted credits timing for her chosen path.

When she started her doctorate at NYU, topics like magic, traditionally outside of the Islamic canon, were just starting to gain attention. Interest in understanding Islamic traditions of magic and the occult were beginning to be recognized as legitimate fields of study.

“I saw that there wasn’t scholarship in the evil eye as it relates to Islamic art history, particularly in the medieval period,” she explains, “and that was a gap I could fill.”

Halsted believes that the evil eye, and the associated cultural materials, provides a better understanding of Islamic art as a whole, while also illuminating aspects of a culture that has not yet received the attention it deserves.

Because the belief in the evil eye has been so consistent throughout European and Middle Eastern history, the phenomenon can unify rather than divide.

“It isn’t just the study of the belief itself, but how that belief links to other cultures and religions — that’s where we find the common ground.”

Through her teaching and scholarship, Halsted is helping AAHVS to expand the geographic and chronological range of its areas of expertise.

“Having a medievalist who is also an Islamicist on our faculty is a huge boon for Duke,” says Paul B. Jaskot, professor and chair of the department.

“She not only connects AAHVS with so many other areas of the university but also allows our students the chance to explore 1,000 years of art history around the Mediterranean.”

As an example, Halsted turns to the Helix, Amazon’s new headquarters in Virginia. The company presented the design as a nod to the double helix, a term used to describe the structure of DNA molecules, but it also bears a striking resemblance to the Great Mosque of Samarra in Iraq, a structure with an enduring impact on world architecture.

Halsted believes the global impact of much Islamic art and architecture is neither understood nor recognized because people are often totally unfamiliar with medieval Islamic traditions and history.

“I’d like to peel away the preconceived notions and ideas so many people have, and reveal all the many things Islamic art and architecture can be,” she says.