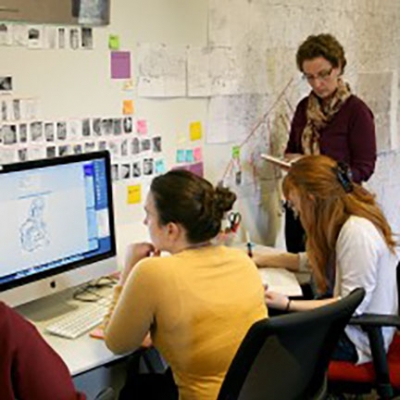 The Digital Athens Project began in the fall of 2014. The initial aim of this project was to produce a comprehensive digital map in ArcGIS of the archaeological remains of ancient Athens uncovered both in systematic and rescue excavations. The project began as a collaborative endeavor, and involved undergraduate and graduate students at Duke as well as colleagues based in Athens at the American College of Greece (Deree) and the American School of Classical Studies at Athens (ASCSA). The Duke team focused on digitizing and geo-referencing excavation plans and historical maps, and plotting the locations of burials, wells, workshops, public buildings, and sacred structures. The visualization of how the city changed over time was a major aim of this project. In addition to the research cluster in the Wired lab, the Digital Athens Project has also involved two iterations of the course “The Art and Archaeology of Ancient Athens,” which was team-taught virtually between Duke and Deree in both 2014 and 2017, and included a spring break trip for the Duke students to Athens.

The next phase of the project, which began in the summer of 2020, is focused on the history of excavations in the Athenian Agora, initiated in the 1930s under the auspices of the ASCSA. In this phase, we plan to visualize the houses, businesses, churches, and families that comprised the early 20th-century neighborhood known as Vrysaki, which occupied the site of the Athenian Agora and was destroyed to make way for the excavations. The aim is to build a content-rich website, with historical photographs and 3-D models of the now-absent buildings, that will tell the history of this once vibrant area of the city that was one of the most densely populated neighborhoods of Athens.