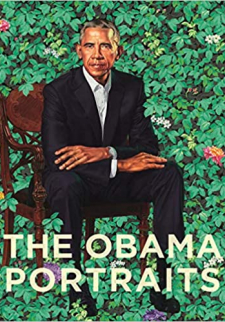 From the moment of their unveiling at the National Portrait Gallery in early 2018, the portraits of Barack and Michelle Obama have become two of the most beloved artworks of our time. Kehinde Wiley's portrait of President Obama and Amy Sherald's portrait of the former first lady have inspired unprecedented responses from the public, and attendance at the museum has more than doubled as visitors travel from near and far to view these larger-than-life paintings. After witnessing a woman drop to her knees in prayer before the portrait of Barack Obama, one guard said, "No other painting gets the same kind of reactions. Ever." The Obama Portraits is the first book about the making, meaning, and significance of these remarkable artworks.

Richly illustrated with images of the portraits, exclusive pictures of the Obamas with the artists during their sittings, and photos of the historic unveiling ceremony by former White House photographer Pete Souza, this book offers insight into what these paintings can tell us about the history of portraiture and American culture. The volume also features a transcript of the unveiling ceremony, which includes moving remarks by the Obamas and the artists. A reversible dust jacket allows readers to choose which portrait to display on the front cover.

An inspiring history of the creation and impact of the Obama portraits, this fascinating book speaks to the power of art―especially portraiture―to bring people together and promote cultural change.