"'The Water On Venus Won't Help You A Bit': Films of Michael Robinson"

Michael Robinson's moving image works explore personal and collective experience in a mediated world gone weird. His films estrange popular music, television, and internet sources, reconfiguring them into uncannily emotional forms. "The Water On Venus Won't Help You A Bit: Films of Michael Robinson" traces a line from 2007's "Victory Over the Sun" - where the decaying architecture of a better tomorrow squares off against the hollow seduction of a cold November Rain - to 2017's "Onward Lossless Follows", in which a Venus-skeptical preacher, a woozy abduction romance, and an airlifted horse with no name unite in strange communion, hatching plans of ecstatic escape.

In addition to the film program, we are thrilled to host a wide-ranging conversation between Michael Robinson and Wexner Center for the Arts Film/Video Curator Chris Stults.

--
Michael Robinson is a filmmaker and artist whose work explores the emotional mechanics of popular media, the nature of heartache, and the instability of the reality we inhabit. Riding the line between nostalgia and contempt, these works invoke a queer balancing of dark humor and bald sentiment - indulging the seductions of dramatic formulas and aesthetic excess amidst heavy doses of manipulation, abstraction, and damnation.

END_OF_DOCUMENT_TOKEN_TO_BE_REPLACED 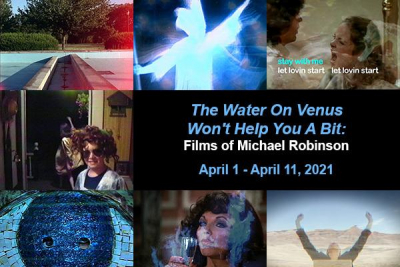