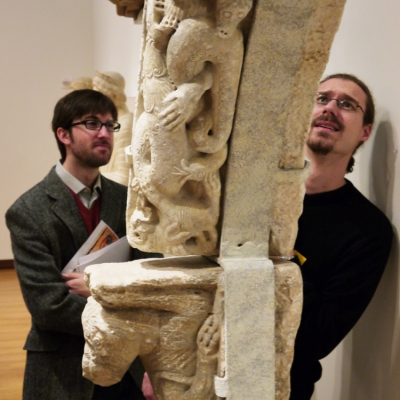 The Alife Arch project interrogates the provenance and function of several stone fragments in the Brummer Collection of the Nasher Museum of Art at Duke University. The project follows the lives of these fragments from their original contexts in antiquity to the Nasher today. Spoliafrom widespread ancient monuments, the fragments were brought to the southern Italian city of Alife in the Middle Ages, where they were used in the sculptural decoration of the cathedral.

The students involved in this project are researching the ancient marble trade, hoping to establish how these stone blocks may have traveled through the Mediterranean to Alife, and will communicate their research through digital maps.

This project also engages with photogrammetry technology, with which students rendered detailed digital 3D models of the individual fragments of the arch. Following analysis of each fragment, students searched forcomparanda in ancient and medieval monuments and hypothetically situated the models of the fragments into architectural and micro-architectural settings such as portals, statue bases, and pulpits. With digital technologies such as this, we can better envision the “potential pasts” of these complex fragments.