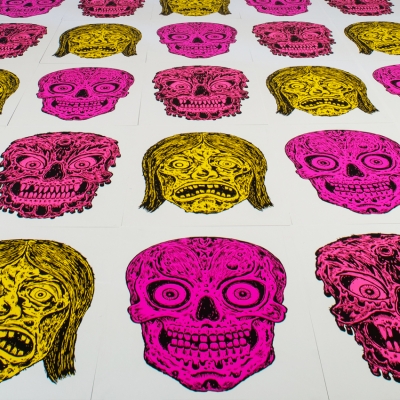 Bill Fick, visiting assistant of the practice of visual arts, recently exhibited an installation of 500+ linocuts and screen prints at SECCA (Southeastern Center for Contemporary Art), Winston-Salem, NC. The installation titled CHAMBER OF CHILLS is part of the 12 x 12 artist salon series that features work by twelve North Carolina artists. The installation of six repeating prints covered the walls and floor of the gallery (the chamber). The images envelope and surround the viewer with Fick's ghoulish comic book characters, such as the werewolf, zombies, skulls and demons. This work highlights Fick's continued interest in sensational comics, lowbrow art and other forms of bold popular graphics. The title of the show is also the title of a horror comic published by Harvey Publications from 1951-1954.

Bill Fick's Chamber of Chills envelops the Preview Gallery with a bracing lineup of zombies, werewolves and skulls. His installation draws from 1950s comic books and a revolving cast of spunky, degenerate characters of his imagining, which over the years have become his signature. Fick's work exudes a brash and bold synergy of pop imagery, cult cartoons, punk rock and die-hard printmaking culture.

A screen-printing workshop held at his 12 x 12 opening shares the participatory spirit of Fick's life and work.

12 x 12 artist salon series presents 12 artists from North Carolina, the 12th State. Each Salon is a pop-up exhibition and conversation with the artist. The series schedule consists of three exhibitions per spring and fall seasons in 2016 and 2017, beginning March 1st, 2016. At the end of the salons, a group exhibition in our Potter Gallery will bring together all twelve artists.

The twelve artists in the series represent a diversity of artistic practices and cultural backgrounds. At salon events, each artist will share ideas and processes of their studio practice in the midst of recent, new, or site-specific work presented in SECCA's Preview Gallery. Each artist will discuss their experience first-hand, inviting the public to ask questions and to engage in conversation. Like a studio visit, these salon events are a social space for the discovery and discussion, providing invaluable feedback to artists and insights to those who come to experience them.

12 x 12 gives artists from across North Carolina a public platform for continued artistic development and recognition in the place where they live and work, and beyond. At the same time, the series aims to push conversation around contemporary art forward and to consider the significance of localism as a curatorial framework. What does it mean to these artists to be working in the South and Southeast today, especially after the Internet and Globalization?

An arts initiative sponsored by the Flow Foundation

Bill Fick is a consummate printmaker. Founder and Director of Supergraphic print shop in Durham, North Carolina, his artistic practice involves a high-energy regimen of making work, teaching printmaking, and building artist networks.Fick lives and works in Durham, North Carolina. He is currently a Visiting Assistant Professor at Duke University in the Department of Art, Art History and Visual Studies. Over the past 25 years he has exhibited his prints nationally and internationally and has taught at many institutions across the United States including the University of North Carolina (Chapel Hill and Greensboro), Pratt Institute and Rutgers University. Fick's work can be found in the collections of the Fogg Art Museum, Harvard University; The New York Public Library and the Zimmerli Art Museum, Rutgers University. In 1993 Fick was awarded a National Endowment for the Arts Visual Artist Fellowship and in 1995 a North Carolina Arts Council Artist Fellowship.